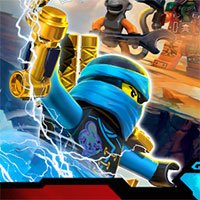 NINJAGO Skybound is a Lego Ninjago game based on the TV series for kids. In this game, Djinn Nadakhan is stealing parts of the Ninjago island to rebuild his realm in the sky called Djinjago. By stealing parts of the island, he is causing great harm. When other members of the team tried to stop him, he defeated them with his army of Sky Pirates. In NINJAGO Skybound Game, you will control the ninja Jay and you must rescue Zane, Nya, Lloyd, Cole and Kai, and save the entire land! The evil Djinn Nadakhan is up to no good again. Play as Jay and battle the gang of Sky Pirates to rescue your friends and rebuild Ninjago in NINJAGO Skybound Game! Use your ninja skills to fight your enemies and face Djinn Nadakhan himself!

NINJAGO Skybound Game is one of many web based games on Round Games for you to play online without downloading. This game is one of the Action Games at Round Games. It also tagged as a Ninjago and Skill game. To play even more free games, view our most played and all games pages. If you want to play more like NINJAGO Skybound. Then you can simply check out the games inside the game tags that are the most relevant to your interests. Or check the Action Games category or check the related games section at the end of the game page.

Also make sure to check out LEGO Ninjago: Prime Empire Game, you may enjoy playing it.